Justin Hammer was a business rival of Tony Stark and the CEO of Hammer Industries until his dealings with terrorist Ivan Vanko led to his arrest.

In an attempt to discredit Tony Stark's Iron Man, Thaddeus Ross hired Justin Hammer to develop a single pilot close-quarter combat vehicle with full protection and attack capabilities. Soon, both Hammer and Ross presented the vehicle to Senator Stern in Washington, D.C. and Lieutenant Colonel James Rhodes. However, despite Hammer's claims that the vehicle was not vulnerable to surface-to-air attacks, the Congolese Army was able to shoot the plane down during its first mission, leaving the pilot alone in hostile territory, leading to Stark being sent in to rescue the pilot.[1]

As Iron Man continued to gain popularity, Justin Hammer again attempted to discredit him by secretly focusing Hammer Industries' resources into building their own version of the Iron Man suit with a new Arc Reactor, something many of governments were attempting to do. The prototypes were unsuccessful however and during one test flight the suit malfunctioned, twisting the pilot's body and seriously damaging his spine, although he managed to survive the incident.[2]

Meeting with the Senator

Justin Hammer, weapons manufacturer and military defense contractor, was called as an expert to prove that Tony Stark's monopoly on his Iron Man armor was a danger for the United States of America, as part of Senator Stern's attempt to force Stark to give the government his Iron Man suit technology. Hammer showed many attempts made by America's enemies to replicate Iron Man's armor which all of them failed; however, Hammer was then humiliated by Stark himself, who showed Hammer's men attempting to do the same but ending up severely injuring the pilot's spine. Hammer tried to save face by confirming the pilot's survival but, ultimately, Stark ended up winning the case. After his public humiliation, Hammer's contract with the United States Armed Forces was suspended.[2] 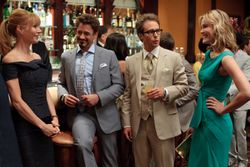 Later Justin Hammer met Tony Stark and Pepper Potts again in Monaco, where both of them were supporting one of the cars involved in the race. Hammer was with Christine Everhart, a journalist who was flirting with him for having some scoops and an interview for Vanity Fair, but she was told by Stark that Hammer lost his contract with the Government, forcing Hammer to defend his companies' future.

As Hammer's interview with Christine Everhart went underway, they noticed on the television that Tony Stark had taken control of his own car and decided to race it himself. This led to Everhart leaving the interview to follow up this story instead. Having been left alone, Hammer watched the race unfold and witnessed Ivan Vanko step onto the track with his own weaponised armor complete with electrified whips and attempt to assassinate Stark. Stark survived the attack and Vanko was arrested, but Hammer watched the footage closely and saw an opportunity in finding someone who had successfully made an Arc Reactor powered suit.[2]

Hammer had Ivan Vanko freed from prison and took him to his personal secret storage facility, in which the two of them forged an alliance. Hammer told Vanko that he had to build for him many armors so advanced that Iron Man's would become old news. Vanko agreed as long as Hammer arranged to have his pet bird flown in from Russia.

As they toured the Hammer Industries facility, Vanko examined the prototype suits, pulling the head off one to examine the inside, much to Hammer's horror when he considered the cost of the prototype. Vanko then hacked into the facilities' security systems with little effort and called it shit. Over the next few days Vanko worked tirelessly on designing the new suits, as a reward Hammer brought in a bird, claiming it to be Vanko's own from Russia. Vanko told him that building armors was not the best choice, and convinced him that drones were better. Hammer believed Vanko's claims, but he did not realize that Vanko was making them for his own purposes.[2]

General Meade of the United States Air Force, who had recieved one of Stark's armors from James Rhodes, summoned Hammer to Edwards Air Force Base to improve and weaponize the suit. Hammer weaponized the armor with the best of the weapons produced by Hammer Industries, creating War Machine, who would introduce the Hammer Drones at the Stark Expo. Disappointed for having the drones not working at the Expo, which Vanko told him, Hammer had two guards keep an eye on him for not keeping to their arrangement.[2]

While playing a round of golf with Senator Stern, Hammer called Vanko for an update on the design of the new Hammer Drones, wanting to know what they would be capable of doing at the Stark Expo presentation. Vanko informed him that he would only be able to make the drones salute and not fire their weapons.

Furious about having been lied to, Hammer stormed into Ivan Vanko's room and confronted him with two security guards. Hammer ordered his men to take Vanko's bird, shoes and pillow away from him to demonstrate how it felt to have things stolen from you. Hammer then told Vanko that he was now heading to the Stark Expo to demonstrate the Hammer Drones and a new project as well. Hammer then left Vanko with his guards to watch over him.[2]

文件:JHammer-and-your-drones.jpg
Hammer shows off his drones at Stark Expo

At the Expo, after a brief and goofy introduction where confidently he danced on stage to music, trying to one-up Stark's presentation a few months earlier, Hammer presented his drones and the War Machine armor, each drone representing a different branch of the military; the drones saluted just as Vanko had promised.

The demonstration was interrupted by Iron Man, who has discovered that Hammer was working with Ivan Vanko. Hammer initally tried to play off the situation and nervously deny knowledge of Vanko's survival, but Vanko remotely took control of the Hammer Drones and of War Machine's armor, starting a massive attack on the Expo. As the attack started Hammer dived to safety off the stage as his drones fired upon the audience.[2]

Hammer tried to have his technicians regain control of the drones, but was halted by Pepper Potts and Natasha Romanoff, the latter of whom forced him to reveal Vanko's location by slamming his head onto the table and twisting his arm. Pepper in turn called the police and had him arrested for his complicity with Ivan Vanko. As he was taken away, Hammer assured her that this was no problem for him and he would be back.[2]

文件:Justin Hammer in jail.png
Hammer and his boyfriend in Seagate Prison

Justin Hammer was sent to Seagate Prison after being arrested at the Stark Expo. He had apparently developed a relationship with a much younger man. While being interviewed for a documentary, Hammer stated that he resented Trevor Slattery and felt that he should be more recognized. During the interview, his partner made a gesture to him which he dismissed. At the same time, he was reading a Forbes magazine with Pepper Potts featured on the cover.[4]