Dwight Frye was an Inhuman who assisted Lash in his campaign to slaughter other Inhumans until he was captured by the ATCU and murdered by Lash as a result.

Dwight Frye was born on March 21, 1977 in Cedar Rapids, Iowa. Previously a specialist at Social Security Administration's Information Technology Department, Dwight Frye was exposed to Terrigenesis during the Inhuman Outbreak, gaining him the ability to sense and track other Inhumans. The gift proved to also be a curse as whenever Frye came near another Inhuman he had an allergic reaction which caused terrible headaches and boils and rashes to appear across his body.

Seeing his powers as much more of a curse than a gift, Frye was pleased when he was approached by another Inhuman named Lash who wanted his help to track down other Inhumans so Lash could execute them. Believing that Inhumans should not be allowed to live, Frye happily agreed and used his hacking skills to find various Inhumans across the country, including Shane and Lori Henson, and send them a strange email before Lash killed them. Frye also felt a sense of relief when Lash executed another Inhuman.[1]

文件:DwightFrye-Captured.jpg
Frye is captured by S.H.I.E.L.D. and the ATCU

Frye's activities were eventually discovered by S.H.I.E.L.D. and the ATCU during their hunt for Lash. The units set up a raid of Frye's home, led by Daisy Johnson, Alphonso Mackenzie and Luther Banks. Frye attempted to hide in a closet but was soon found by Johnson. Although she tried to speak calmly to him, due to Johnson's own Inhuman powers, Frye developed a rash and headache and begged her to leave. When he tried to push her away Johnson sent a shockwave which knocked him back.

While Johnson was moved into another room away from him, Frye was questioned by Phil Coulson and Rosalind Price; they revealed that they knew about his connection to Lash and wanted to know how they could find him. When Frye attempted to escape, Coulson used his Prosthetic Hand to push him back down. Frye revealed that Lash would always come to him so he did not know how he could be found; he went on to explain that he believed that Lash's activities were not done out of cruelty, but mercy as he felt that Inhumans did not deserve to live.

Having gotten the information they needed from him about Lash, Coulson and Price ordered Agent Luther Banks to move him to the Endotex Labs to be imprisoned while they continued to search his home for evidence. While Frye waited in the van, Coulson and Price made a deal to allow Johnson and Mackenzie to ride in the van alongside him so they could inspect the ATCU's facility to ensure that Frye was treated well while imprisoned there. Johnson's close presence caused Frye's headaches and rash to flare up once again, causing him great pain during their journey.[1]

文件:DwightFrye-Reaction.jpg
Frye reacts to being too close to an Inhuman

As they drove along, Frye continued to suffer great pain due to Daisy Johnson's presence, but it suddenly seemed to get worse and worse. The reason was revealed when Lash attacked the van and ripped open the roof before attacking the agents inside while Frye screamed in fear. Johnson used a shockwave to knock Lash back, but this resulted in the entire van crashing and the agents inside being incapacitated. 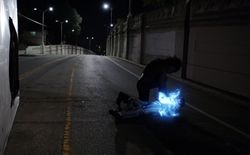 Frye is murdered by Lash

With no agents to protect him, Lash dragged Frye from the van and laid him in the middle of the road. Too afraid to move, Frye begged Lash to understand that he had only told S.H.I.E.L.D. and the ATCU what he believed to be the truth, that Lash was not being cruel but merciful. To his horror, Lash informed him that he was not merciful, but instead was necessary. Despite Frye's continued pleas, Lash decided to prevent him from giving up any more information; he then used his powers to blast a hole in Frye's chest, killing him instantly.[1]

Frye was an Inhuman who achieved his genetic potential after undergoing Terrigenesis during the Inhuman Outbreak, gaining superhuman powers.