The Tesseract (also called the Cube) is a cube-shaped containment vessel for an Infinity Stone possessing unlimited energy. It contained one of six singularities that predated the universe. Once the universe came into existence, it changed form. It was used by various ancient civilizations before coming into Asgardians hands who brought it to Earth. After the Battle of New York, it was returned to Asgard. The Tesseract represents space.

The Tesseract is a remnant of one of the six singularities which existed before the universe. After the universe came into existence, four cosmic beings known as the Cosmic Entities forged the energies of these singularities into six immensely powerful objects called the Infinity Stones. The Tesseract itself represented the fabric of space, and was used by various civilizations to achieve their ends.[1]

Over the aeons since its creation, the Tesseract came to be kept in the care of the Asgardians, locked away in Odin's Vault.

The Tesseract was brought to Earth by Odin and, over the centuries, it ended up being kept safe in a church in the village of Tønsberg. Eventually, the Tesseract became the subject of many legends of Norse mythology.[2][3] 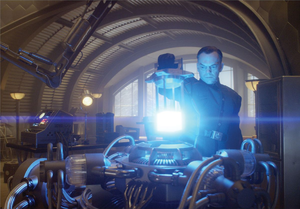 In March 1942, during World War II, Johann Schmidt, the commander of the Nazi special weapons division: HYDRA, invaded Tønsberg and found the Tesseract in a box hidden behind a sculptured mural of Yggdrasil, the world tree. Schmidt took the Tesseract back to his headquarters in the Alps to be experimented by Arnim Zola.

After experimenting on the Tesseract, Schmidt and Zola were able to harness the object's power to create highly advanced weaponry, fueling Schmidt's plans for world domination. With the power of the Tesseract, Schmidt felt strong enough to turn his back on Adolf Hitler and the Third Reich. He intended to destroy both the Axis and Allied powers and make himself ruler of the world.

In November 1943, Schmidt brought the Tesseract into HYDRA's top secret weapons facility in the Austrian Alps, located halfway between Kitzbühel and Klagenfurt. During the facility's operation Allied Prisoners of War were forced to serve in the large-scale assembly of Tesseract based energy weapons, including development of the Valkyrie super-bomber, and a set of nuclear-scale Tesseract energy bombs. When the Allied super soldier Captain America infiltrated the facility to free the four-hundred Allied POWs, a large confrontation began. Seeing that his men wouldn't be able to defeat the freed prisoners, Schmidt took the Tesseract and set the base to self-destruct.

The Tesseract at the bottom of the ocean

In May 1945, with his gigantic super bomber, the Valkyrie (which was powered by the Tesseract), finally finished, Schmidt was prepared to launch an offensive that would shake the entire planet. With its flying nuclear bombs (which were also powered by the Tesseract), Schmidt intended to destroy several world-wide strategic points, including the entire East Coast of the United States. However, his last base was attacked by Captain America, the Howling Commandos, and a US Army detachment led by Colonel Chester Phillips and Peggy Carter of the Strategic Scientific Reserve.

Schmidt's men were defeated, but he managed to take the Tesseract and launched the Valkyrie. However, Captain America managed to board the plane and attacked Schmidt, damaging the machine that was using the Tesseract to power the Valkyrie and its flying nuclear bombs. Angered, Schmidt physically handled the Tesseract, only for the object to open a portal, which consumed Schmidt before closing. The Tesseract fell burning through the floors, causing it to plunge into the sea below. Some time later, it was recovered by Howard Stark – CEO of Stark Industries and a member of the Strategic Scientific Reserve.[3]

文件:Sdfgjkl.jpg
The Tesseract being shown to Erik Selvig.

After World War II, Howard Stark became one of the primary founders of S.H.I.E.L.D., an international counterespionage agency. He studied the Tesseract for some time, which stayed in S.H.I.E.L.D.'s possession after his death. At the beginning of the 21st century, Howard's note book with a drawing of a "hypercube", was found among his research and examined by his son Tony.[4]

By 2010, the Tesseract had remained in S.H.I.E.L.D.'s possession and the World Security Council ordered S.H.I.E.L.D. to make one of its primary objectives to reignite the Tesseract, a project titled Project P.E.G.A.S.U.S.. Nick Fury, acting director of S.H.I.E.L.D., instead turned his attention to the recovery and surveillance of extraordinary people for a program that would later be called the Avengers Initiative.[5]

After an incident in New Mexico, during which the Asgardian prince Thor battled and defeated the Destroyer, humanity finally realized they were not alone in the universe.[2] Thor's friend, astrophysicist Dr. Erik Selvig, was hired by Fury to research and study the Tesseract with hopes of unlocking its power just as Schmidt had.[6] Later, the Tessearct was moved to the Joint Dark Energy Mission Facility in the Mojave Desert, where Fury also positioned Clint Barton to keep guard over Selvig and the Tesseract.[7][8]

In 2012, after his defeat at the hands of Thor, Loki came into contact with the alien race known as the Chitauri, and their master, Thanos. For reasons which were unknown at the time, Thanos had already been seeking the Tesseract, and Loki promised to retrieve it from Earth and give it to Thanos in exchange for his army.

Through manipulation of the Tesseract's energy, Thanos teleported Loki to the Tesseract's location at the Joint Dark Energy Mission Facility, where he killed several S.H.I.E.L.D. agents and brainwashed Selvig, Barton and a number of other agents into following him using a Scepter gifted to him by Thanos. He revealed his plans to use the Tesseract to enslave and rule over the human race, and quickly stole the aforementioned object and escaped. The energy from the portal destroyed the entire facility, while Loki took the Tesseract to an undisclosed location.

In response to Loki's threat, S.H.I.E.L.D. decided to re-start the Avengers Initiative, and swayed Bruce Banner, Iron Man, and Captain America to their cause. Fury also wanted them to trace the Tesseract as it was emitting small amounts of gamma radiation that only Banner and Stark would be able to trace. 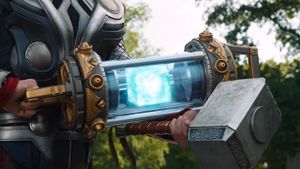 Thor prepares to take the Tesseract back to Asgard.

While Loki was dealing with the Avengers, he ordered Dr. Selvig to begin working on a device that could utilize the Tesseract's full power to create a portal that could transport the Chitauri army to Earth. Selvig and Loki later put their plan into effect and opened the portal above Stark Tower in New York City, which unleashed the Chitauri upon the city and a immense battle ensued. Agent Natasha Romanoff eventually used the Tesseract energy inside of Loki's scepter to reverse the effects of the device, shutting down the Tesseract and closing the portal. The remaining Chitauri were then defeated by the Avengers.

After his return to Asgard, Thor gave the Tesseract to Heimdall. The all-seeing Asgardian used the Tesseract to repair the Bifrost Bridge so the Asgardians could once again protect all of the inhabitants of the Nine Realms endangered by the Marauders.[9]

Thor had a vision of the Infinity Stones and their role in the events of the future years, the Tesseract was shown to be shattered and the stone inside was sent into space.[10]

模板:Rewrite The Tesseract is an Infinity Stone, representing the fabric of space. If used correctly, the Tesseract can open gateways to any part of the universe, and it is presumable that it grants omnipresence when used at full potential.[8]

It can be used to restore objects and artifacts of incredible power, like the Bifrost. Also to perform these functions it produces limitless energy. A single spark of its power was enough to create a small explosion. It is a source of unlimited energy, and it can be channeled and used to power several things from planes and factories to guns and tanks.

Many people have tried to duplicate the type of energy that the Tesseract emits. The only people known to have successfully harnessed the Tesseract's energy were Johann Schmidt and Arnim Zola, who developed a way to siphon off and store its energy to power weapons.[3] Following World War II, a group of former HYDRA scientists managed to escape to South America, where they were employed by the government of Peru to make the new Tesseract-powered weapon. The scientists were successful, but due to the instability of the Tesseract energy, the weapon ended up stuck in the undiscovered Incan temple.[11]

After Howard Stark found the Tesseract, he managed to discover how to make a similar element that could emit a similar energy, but with the technology of his era, he was not able to. Howard's son, Tony was able to make the element based on a hidden tape Howard made to Tony when he was very young. Tony used the element as the core for a new Arc Reactor that would stop his Palladium poisoning from his previous one.[4]

In 2013, the lost HYDRA weapon in Peru was discovered by an archaeological team. S.H.I.E.L.D. classified the object as an 0-8-4 and sent a team to retrieve it. The weapon was deemed to be dangerous technology, and was purportedly destroyed by launching it into the Sun from the secret S.H.I.E.L.D. installation known as The Slingshot.[11] In fact, the device was sent into The Fridge installation, where it was stolen by HYDRA agent John Garrett.[12]. It was later recovered by Phil Coulson, who used it to kill Garrett.[13].