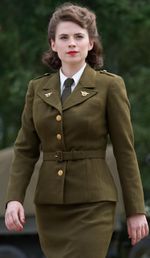 文件:Oneshotcarter-4.png
Carter on a mission to obtain the Zodiac

文件:Peggy's family.png
Carter's family photographs by her bed
文件:Peggy 1953-2.png
Carter, 32 years old, in an interview about the life of Captain America

Peggy Carter continued working for the Strategic Scientific Reserve until 1949.[2] After that, she became a full time S.H.I.E.L.D. agent, working alongside Howard Stark. Sometime after the war she met and married a man whom Steve Rogers had saved throughout the course of the war. Together they had a son and daughter.

In 1953, Peggy Carter was interviewed about Steve Rogers and their involvement in the war. This footage was on display at the Captain America Exhibit at the Smithsonian Institution.[8]

In 1987, Carter was still working as a S.H.I.E.L.D. agent. She met Dr. Hank Pym, a young scientist who invented particles and a suit that could shrink a human being to the size of an ant, yet maintain his original strength. When a group of radicals in the Soviet-controlled East Berlin discovered a piece of old HYDRA technology, Howard Stark wanted to send an agent to Germany and stop them from reverse-engineering it.

However, Pym was unwilling to give his suit to anyone else, so Carter convinced him to go to Berlin personally. To see if the suit actually worked, she fired a few bullets at Pym, and he became small like an ant in the blink of an eye, proving he was ready for the mission. He left for Berlin later that day.[9]

When Pym returned from his mission in Berlin, he informed Carter and Stark about what had happened there. Stark tried to prohibit Pym from being able to do any further missions, but Pym stated that the only way the organization could use Pym Particles was if he was using them. Pym then implied that he was willing to help in any future missions available to him.[10]

However, in 1989, Pym announced his resignation from the organization before her, Howard Stark and Mitchell Carson, after he had discovered that S.H.I.E.L.D. was trying to replicate the Pym Particles from the Ant-Man technology, showing his anger by slamming Carson's head onto the desk after he insulted him. Carter and Stark attempted to convince Pym to reconsider, reminding him not to allow the death of his beloved wife, Janet van Dyne, to destroy the good work he had achieved at S.H.I.E.L.D.; however Pym refused to listen and left the Triskelion. As Pym exited, Carter watched and listened as Carson advised that Pym should be restrained. Carter turned to Carson and advised him not to make Pym his enemy.[11]

Before 2012, Carter had quit S.H.I.E.L.D. and retired.[1] In her advanced age, she now had Alzheimer's disease, which caused her to have to stay at a retirement home in Washington, D.C..[8]

After Steve Rogers returned from being frozen for nearly 70 years, he was given files about his friends and allies from the 1940s, including Peggy Carter's. He thought about calling her, but, in the end, decided against it, afraid of her seeing him still young.[1]

Two years after he was saved, Rogers eventually went to visit her at the retirement home where she lived. She was lucid at first, but after a few minutes of conversation, due to her mental deterioration, she suddenly acted as if she met Rogers directly after he had crash-landed after the Battle in the Valkyrie.[8] -->

Carter is tough and resilient, standing strong whenever she is mistreated, be it by man or woman. She has a sarcastic streak, and can also become close to a select few people, such as Steve Rogers, Howard Stark, Edwin Jarvis, and a few others. Though she believes in morality, she will lie, if the situation calls for it, including the period when she was hiding her involvement with Howard Stark from the SSR.

A loyal soldier, Carter will do whatever is needed to get the job done, very nearly having Howard Stark shot out of the sky, when he was endangering the city of New York. Such sacrifices wound her; she does not enjoy it. Being somewhat no-nonsense, Carter does not take kindly to messing about during a mission or when there is work to be done. She is also quite clever, always able to work her way out of a pinch at a moment's notice. Though her number of dear friends is slim, she is exceedingly appreciative to those she has.